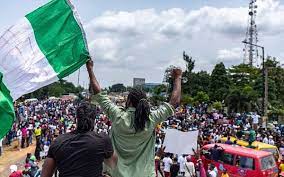 Protesters have early this morning took to the streets in some cities across the country to hold peaceful protest to mark June 12 also known as Democracy Day.

Our correspondent observed that there are protests in Abuja, Lagos, Akure, Osogbo, Ibadan among others, in which protesters armed with placards and banners with inscriptions of June 12. Some of the inscriptions also include: ‘Resign if you are tired, Buhari’, ‘Where is our light?, Bring back our light’, ‘Restructure Nigeria Now’, among others.
In Lagos, protesters had stormed the Gani Fawehinmi Freedom Park, Ojota
As early as 5am on Saturday, the police stationed armed personnel carriers at Freedom Park, Ojota with several patrol vehicles fully loaded with policemen armed to the teeth, to prevent the June 12 agitators from gaining entrance into the park.
The protesters according to the news monitored on Channelstv were seen marching towards Toll gate end of Lagos /Expressway, chanting solidarity songs before they were forcefully dispersed.
Meanwhile, in Abuja it was also reported that protesters were dispersed by police using teargas canisters.
So far there has not been major faceoff recorded in the protests.

How TB Joshua of SCOAN Died: His Last Moments.

Four DIed, One Injure In Kaduna. 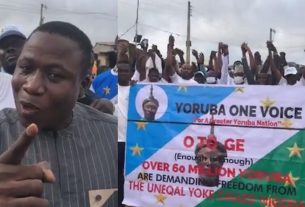 Unfreeze My Account Now Or Else . . . Sunday Igboho Dares FG